STANDING IN MY TRUTH 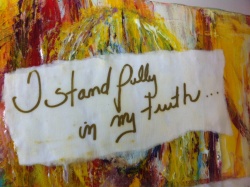 On my office wall is a painting of a woman, strong  and vibrant, with words embedded into the canvas.  They read “ I love the light for it shows me the way, yet I will endure the darkness for it shows me the stars.”  These words have given me both comfort and inspiration in the last months.

In February I published my raw and revealing memoir Unsinkable: My Untold Story.  In Unsinkable I share my journey of growing up with a mom who suffered from an undiagnosed mental illness.  It is a story of trauma, hope, love and healing.

There were so many times in the writing of Unsinkable, that I almost stopped, that I simply lost the courage to tell such a revealing and personal part of my life.  I would become paralyzed by the idea of what “others” would think of me, not the least being my family.

I had come to a place in my life, though, that the story simply had to be told.  How could I stand on stages and share with audiences that any dream they had for their life was achievable, that any obstacle that they had in their life could be overcome, if I didn’t share how I had come to believe this.

The last eight months has been nothing short of remarkable.  The email responses, the personal messages, the letters delivered by hand; it seems that in writing Unsinkable I had touched a chord.  People shared thoughts on how the war had affected their parents, how mental health issues had touched their lives, how someone they loved was still struggling.  And in all the letters, and phone calls and messages, I heard a longing—a longing for connection.

I know this longing.  It is a longing to be heard, to be seen, to be understood. When I experienced depression, I felt very alone.  I didn’t know how to describe this horrible bleakness that surrounded me, and I certainly didn’t know how to share it with others. I had so much to be grateful for, so much to look forward to: how could I spend anytime wallowing in sadness? How could I be indulgent enough to need anything?

Despite my own best thinking, I continued to be chased by a dull ever present, low grade depression.  I tried to exercise is away, socialize it away, work it away, but it but it would have none of it.  Ironically, it was only by finally acknowledging it that I began to work through it.  Acknowledging it, meant I had to admit I needed help, that I was just like everybody else in this struggle, and that being an Olympic athlete, a hard worker, an optimist, didn’t make me immune to mental health issues. Darn.

Anxiety, PTS, and other mental health disorders, happen to everyday people.  They happen to successful people, high profile people, to the family down the street.  They often happen to people who have experienced trauma and abuse in their childhood years. And yet, most of us aren’t talking.  There is a great deal of comfort that can arise when somebody shares from a deep level, their struggles, their moments of darkness.

I was terrified that sharing the stories of my childhood and my own struggles with depression and anxiety would change people’s perception of me.  And it did.  I have received an overwhelming number of grateful responses to my openness.  The emotional intensity of people’s responses has been strong.  In many of my talks, half the audience has tears in their eyes as they connect to their own experiences, their own challenges, or those of someone they dearly love.

My story has triggered a number of people in a negative way.  I had to be ready for this before I wrote Unsinkable. I had to be so at peace with myself, that what other people though, was not nearly as important as what I think of myself. Oriah Mountain Warrior writes in the Invitation. “ I want to know if you can disappoint another to be true to yourself.”  I spent a lot of my life, carrying around someone else’s version of the truth. As my office painting states “ I stand fully in my truth.”

For those hundreds and hundreds of people who have written me and opened their hearts to me, I am so grateful to you.  I am grateful for all the people I have learned from these last few months.  There were definitely moments of darkness and fear; there will be again, but how else can we see the stars?  ~ Silken 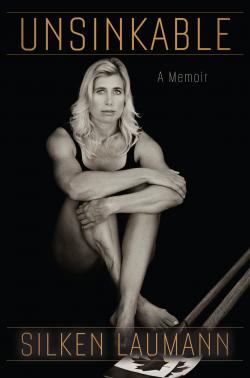