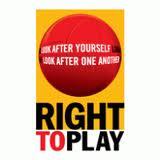 Olympic rowing legend Silken Laumann of Victoria admitted she was hesitant about going to Rwanda in October to witness what Right To Play had accomplished there.

“I had mixed feelings about going because of the genocide that happened there and didn’t know if I could handle it,” said Laumann, a member of the Right to Play board.

“But it was a tremendous experience to be out in the field to see what [Right to Play] has accomplished. Overall, the resiliency of the people is incredible.”

The organization was founded in 2000 by Norwegian speedskater Johann Olav Koss, winner of four Winter Olympics gold medals, and provides opportunities for children in developing nations to play sports by setting up leagues, providing equipment and training local coaches. The goal is to improve health and bring the joy of sport to impoverished young lives.

The 27-member Right To Play board, which includes CEOs and chairmen of major corporations from around the world, is meeting this week at the Oak Bay Beach Hotel to set out the organization’s strategic plan for the next five years.

Right to Play is perhaps the most high-profile sports philanthropic organization in the world. Its budget for 2012 was $34 million, with 40 per cent of its funding coming from the public sector, including the Canadian International Development Agency and the governments of Norway and Netherlands. The other 60 per cent comes from private foundations and the corporate sector.

Koss returned from a run Tuesday along Beach Drive, struck by the “peace, harmony and nature” of Greater Victoria. Leisure activities like running for fun are not common for many people in the world, he said.

“The right to play is unheard of in some places on this planet.”

Koss has done something about that, along with Canadian Olympic greats and Right To Play board members Laumann and Clara Hughes.

Laumann, former chairwoman of Right to Play, was instrumental in getting the board to meet in Victoria, which produces many of Canada’s Summer Olym-pians. She said Right To Play is about using sport as an agent of social change.

“This is not about kicking the ball around,” Laumann said. “This is a well thought-out program that impacts whole communities.”

Hughes, a Summer and Winter Olympian in cycling and speed skating, said Right to Play acts as a kind of “child-protection club in Africa, South America, the Middle East and Northern Canada … it has been proven to impact the lives of children and the communities in which they live.”

The fact many children in the world don’t have a chance to participate in sporting activities deeply affected Koss, who has been instrumental in enlisting numerous Olympians from many nations to aid in the Right To Play cause.