What the Olympic Torch means to me 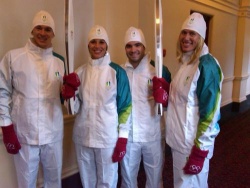 To me the Olympics are really simple. They are about young people who have found the courage to dream and put it all out there. Kids who one day were inspired by something and said “I want to do that.”  And by some miracle they started doing, and they found others to support their dream, to guide them. These athletes are consumed by their ambitions to become the best in the world at what they do. A sport as little known as Skeleton, or Rowing , or Short Track Speed Skating, captures their imagination and begins to shape their life.
The Olympics is the chance to pull it all together, to compete, just like at a world championships, only bigger, only harder because everybody is peaking for the same thing.

This is the passion I see in athletes like Alexandre Despatie who I carried the flame with on Friday, October 30, 2009. This is the sparkle I see in the young rowers eyes as they were passed the Torch by their heroes and role models, the gold medal men’s eight. This inspiration, handed down from one to another, is the real power of the Olympic Games. What we are passing on, through that Torch, is hope. Hope that we can work through our differences and truly begin to unite, hope that the dreams of our young people can be respected and realized, hope that whatever challenges lie ahead, humanity has what it takes to make it through.

That’s a lot for a little flame flowing through my hands last Friday. This is a pretty old flame, and it has come a long way to share its message. This little Greek flame will have 12,000 Canadians, running, wheeling, rowing and skiing it across the country, and for a minute, we can all share that hope and inspiration.  --Silken